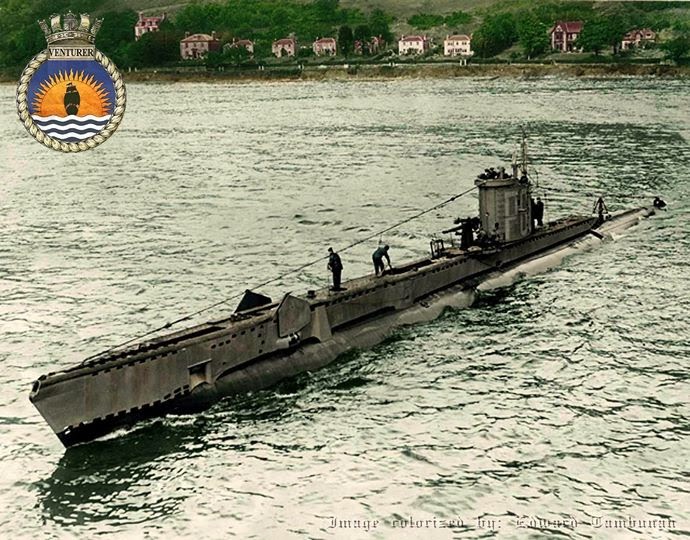 The HMS Venturer was the lead boat of the British V class submarine, a development of the successful U-class. She was built at the Vickers Armstrong yard in Barrow-in-Furness. Construction commenced in August 1942 and she was launched eight months later in May 1943. Venturer was commissioned on 19 August 1943.

Her most famous mission,was her eleventh patrol out of the British submarine base at Lerwick in the Shetland Islands, under the command of 25-year-old Jimmy Launders, which included the only time in the history of naval warfare that one submarine intentionally sank another while both were submerged.

According to decrypted intercepts of German naval communications with Japan, U-864 was carrying a cargo of 65 tonnes of mercury and Messerschmitt jet engine a mission code-named Operation Caesar. According to her cargo list, U-864 also carried parts and engineering drawings for German jet fighter aircraft and other military supplies for Japan, while among her passengers were Messerschmitt engineers Rolf von Chlingensperg and Riclef Schomerus, Japanese torpedo expert Tadao Yamoto, and Japanese fuel expert Toshio Nakai. Consequently, a Royal Navy submarine could be tasked directly against U-864 before the Norwegian coast off Bergen. HMS Venturer under the command of Lieutenant James H. Launders was given the task, which was a submarine with many successes so far, even against German U-Boats. Venturer received an order on the basis of Enigma decrypts to seek, intercept and destroy U-864 which was in the Fedje area.

On 6 February 1945, U-864 passed through the Fedje area without being detected, but on 9 February Venturer heard U-864's engine noise. Launders had decided not to use ASDIC since it would betray his position and spotted the U-boat's periscope as her captain looked for his escort. In an unusually long engagement for a submarine, and in a situation for which neither crew had been trained, Launders waited 45 minutes after first contact before going to action stations. Launders was waiting for U-864 to surface and thus present an easier target. Upon realising they were being followed by the British submarine and that their escort had still not arrived, U-864 zig-zagged underwater in attempted evasive manoeuvres, with each submarine occasionally risking raising her periscope.

Venturer had only eight torpedoes as opposed to the 22 carried by U-864. After three hours Launders decided to make a prediction of U-864's zig-zag, and released a spread of his torpedoes into its predicted course. This manual computation of a firing solution against a three-dimensionally manoeuvring target was the first occasion on which techniques were used and became the basis of modern computer-based torpedo targeting systems. Prior to this attack, no target had been sunk by torpedo where the firing ship had to consider the target's position in three dimensional terms, where the depth of the target was variable and not a fixed value. The computation thus differs fundamentally from those performed by analogue torpedo fire-control computers which regarded the target in strictly 2D terms with a constant depth determined by the target's draft.

The torpedoes were released in 17 second intervals beginning at 12:12, and all taking four minutes to reach their target. Launders then dived Venturer suddenly to evade any retaliation. U-864 heard the torpedoes coming, dived deeper, and turned away to avoid them. The first three torpedoes were avoided, but U-864 unknowingly steering into the path of the fourth. Exploding, U-864 split in two, and sank with all hands coming to rest more than 150 m (500 ft) below the surface. Launders was awarded a bar to his DSO for this action.